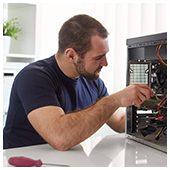 Aside from overseeing your business’s network security, IT security staff are also adept at fixing personal computers. However, that doesn’t necessarily mean they should. In fact, such occurrences ought to be minimized, if not avoided altogether. Your security personnel should be focusing on more pressing issues. But if they’re toiling over PC repairs, not only is your staff’s energy drained, but your IT budget plummets, too.

According to a survey of technology professionals, companies waste as much as $88,660 of their yearly IT budget as a result of having security staff spend an hour or more per work week fixing colleagues’ personal computers. The ‘wasted amount’ was based on an average hourly salary of IT staff multiplied by 52 weeks a year. Other than knowing how much time is wasted, what makes things worse is that IT security staff are among the highest paid employees in most companies.

The fixes have mostly to do with individual rather than department- or company-wide computer problems that don’t necessarily benefit the entire company. The resulting amount is especially staggering for small- and medium-sized businesses (SMBs) whose limited resources are better off spent on business intelligence tools and other network security upgrades.

All those hours spent on fixing personal computers often means neglecting security improvements. The recent WannaCry ransomware attacks, which successfully infected 300,000 computers in 150 countries, demonstrate the dangers of failing to update operating system security patches on time. It should be a routine network security task that, if ignored, can leave your business helpless in the face of a cyber attack as formidable as WannaCry. It didn’t make much money, but had it been executed better, its effects would have been more devastating to businesses, regardless of size.

Profitable projects could also be set aside because of employees’ PC issues. For SMBs with one or two IT staff, this is especially detrimental to productivity and growth. They can easily increase their IT budgets, but if employees’ negligible computer issues keep occurring and systems keep crashing, hiring extra IT personnel won’t do much good.

What businesses should do

The key takeaway in all this is: Proactive IT management eliminates the expenditure required to fix problematic computers. Bolstering your entire IT infrastructure against disruptive crashes is the first step in avoiding the wasteful use of your staff’s time and your company’s money.

Even if your small business has the resources to hire extra staff, the general shortage of cyber security skills also poses a problem. Ultimately, the solution shouldn’t always have to be increasing manpower, but rather maximizing existing resources.

Having experts proactively maintain your IT eliminates the need to solve recurring small issues and lets your staff find a better use for technology resources. If you need non-disruptive technology, call us today for advice.

Published with permission from TechAdvisory.org. Source.
77